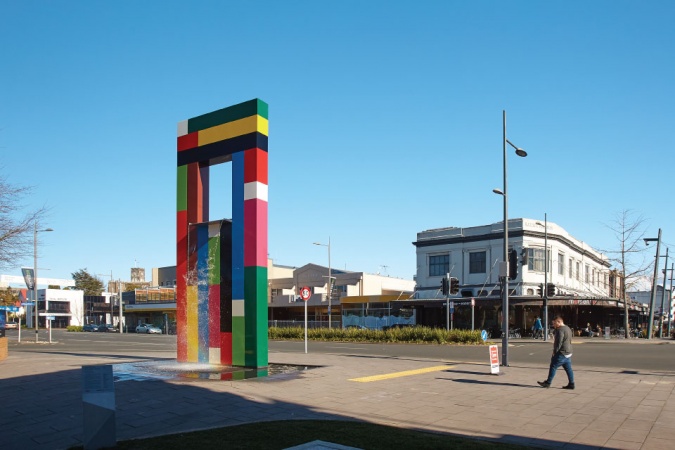 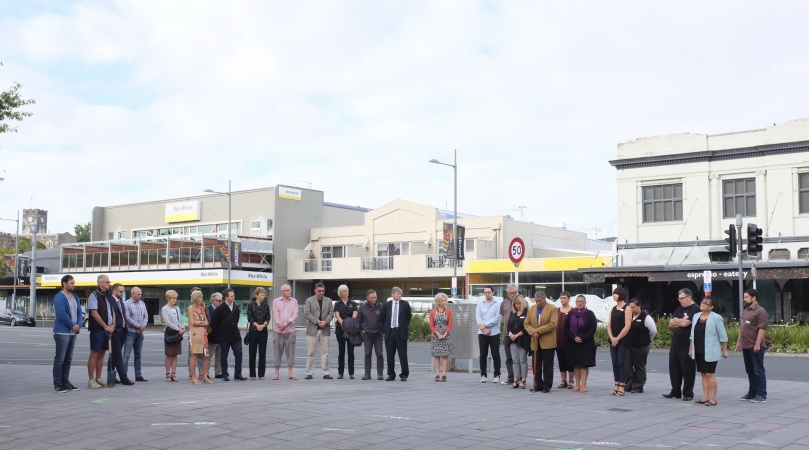 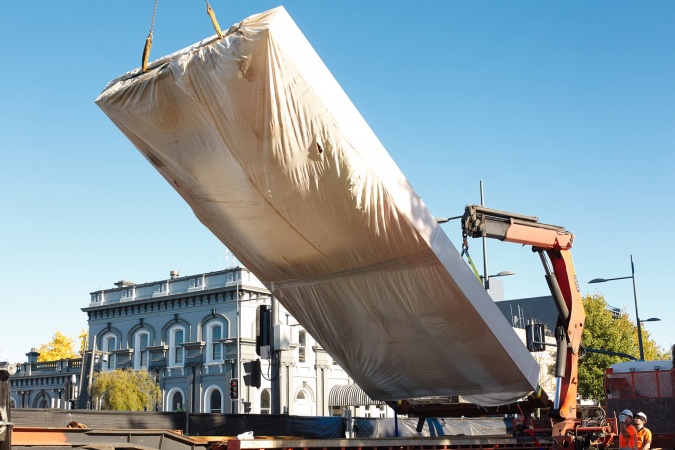 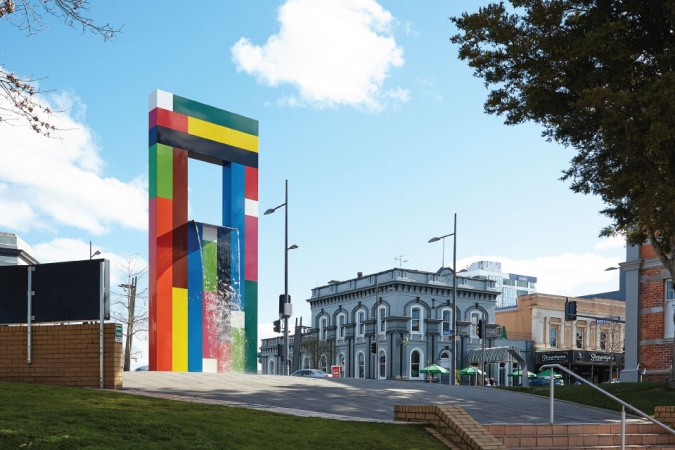 ‘Tongue of the Dog’ (Press Release)

Michael Parekowhai’s striking sculpture sits in the heart of Hamilton’s Cultural Precinct and its position on southern Victoria Street will make it a marker for Waikato Museum, Artspost, Meteor Theatre and for the Waikato River.

The design was conceived by Michael Parekowhai after he came across a little known Maori legend in the Waikato Museum which tells the creation legend of the Waikato River. It’s a lovely story about a servant dog which cuts a pathway for the healing waters of Tongariro to reach an ailing Taupiri. The sculpture’s tongue of water is the symbolic tongue of this dog.

The legend began with siblings Tongariro and Taupiri mountains living side-by-side until marriage took Taupiri away to her new home near Ngaruawahia where, upon her arrival, she soon became ill. Taupiri believed that only the waters of her homeland could heal her so she sent a message to ask Tongariro to deliver her its healing waters. Tongariro sent his faithful servant, in the form of a dog, to cut a pathway for the waters of Tongariro to reach Taupiri. It is said that the river widens and slows at Taupiri, so that she can still draw healing from its waters. The river became known as Waikato te Awa and its waters continue to provide life and prosperity to those who live amongst it today.

The artwork is striking. It stands 8 metres tall and 3.5 metres wide with a window at 4.5 metres high. A tongue of water falls from this window into a shallow pool which the entire work sits in. It’s offset from parallel on the pavement on Victoria Street above Waikato Museum and the water spills out of the river side of the sculpture to make a visual connection to the Waikato River. The steel frame is clad in aluminium rods which are coloured using automotive paint. The tongue is made of stainless steel.

The Cuisenaire rods, a repeating motif in Michael’s work, can be interpreted as metaphors for biculturalism, communication and education. In the past these were used as an educational tool to teach maths. More recently the Cuisenaire rods have been used to teach languages, including te reo Maori, by a method known as Te Ataarangi.

While researching Cuisenaire rods, we’ve discovered Hamilton based Te Ataarangi Trust who has been working to revitalise the Maori language for the past 30 years and uses the coloured rods as a learning tool.

Of European and Maori descent, Michael Parekowhai was born in Porirua and grew up on Auckland’s North Shore. He works in the disciplines of sculpture, installation and photography and is a professor of Fine Arts at the University of Auckland. His exhibition history spans almost two decades of practice and his work is held in significant public and private collections throughout New Zealand and Australia; as well as major works in permanent collections across the Asia-Pacific region and Europe.

Michael Parekowhai has been included in many important exhibitions, including the Asia Pacific Triennial (2006-2007), the Gwangju Biennale (2004), Sydney Biennale (2002), Headlands, MCA, Sydney (1992); and the major art fairs in Basel, Art Basel (2006, 2007) and LISTE (2007). He was the New Zealand representative artist at the 54th Venice Biennale, exhibiting the sculptural installation On First Looking Into Chapman’s Homer.

We’re very happy to announce that the Brian Perry Charitable Trust, the University of Waikato and The Chartwell Trust have become major donors.It is particularly exciting to be building new relationships with the University and with The Chartwell Trust which was founded by Rob Gardiner in Hamilton in the 1970’s and is now based in Auckland. A full list of donors can be found here.

With thanks to the following partners

And the donors and friends of MESH Sculpture Hamilton

Thankyou to our Service Providers for this project:

Morning over ‘Tongue of the Dog'