Lake Rotoroa is a key community resource for the Hamilton region. The tangata whenua who first settled in the area hunted eels, freshwater crayfish and mussels from the lake and built their homes from the surrounding rushes. Development of the Lake Domain has been an ongoing project for the city since it was declared a reserve for public recreation in 1886.

The site on the corner of Ruakiwi Road and Pembroke Street is the location for Lonnie’s installation, celebrates Lake Rotoroa’s significance as a source of sustenance and community enjoyment.

“The lake was once a prime resource of food and materials and with sustained conservation, care and nurture this will continue. The kōwhaiwhai design is my interpretation of the Māngo-pare (Hammer Head shark) and is often referred to as a symbol of strength and perseverance, of never giving up. Related to my signature concertina cut-out works in black builder’s paper, the form of this work is taken from my builders paper model that is literally a twist and bends on a closed concertina that opens down the diagonal shaft and the vertical upright. The form becomes a waharoa or gateway that acts as a threshold that leads into a public recreational space. The kōwhaiwhai fronds fold up and out giving a sense of flourishing energy.” Lonnie Hutchinson 2013

Lonnie Hutchinson draws upon her Ngai Tahu and Samoan heritage to create artworks imbued with a strong sense of place and ancestral significance. Renowned for her acute confrontation of contemporary issues faced by Pacific women, Lonnie exhibits internationally through a broad range of visual and performance media. Her distinctive paper sculptures celebrate the Pacific through the use of customary techniques and traditional motifs. And her wooden carvings are a key feature of the recently renovated Auckland Art Gallery Building.

With thanks to the following partners

Thankyou to our Service Providers for this project;

"The concept for this work is my response to the history of the lake and its significance to tangata whenua in the past and indeed now and in the future." 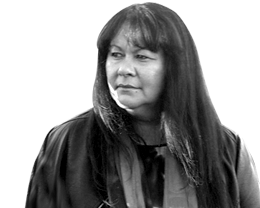